“Life is a series of meetings and partings.” – Charles Dickens 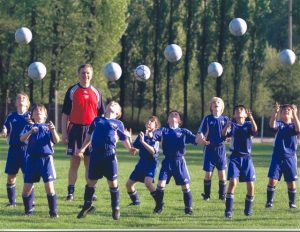 It is said that the most special people need less time to do much good on earth before they are taken away and this sentiment most certainly applies to Roman Tulis. Throughout life, all of us will lose loved ones; in this case we have lost the man that brought us all together. However, now that he is gone, it is the school and his teachings that will keep us together.

This last year has been a difficult one for the Tulis school and the Tulis family. We lost the founder and heart of the Roman Tulis European Soccer School of Excellence, we lost a great coach, we lost a wonderful father and a caring husband, but most of all, we lost a great friend.

Now that he is gone, it is the school and his teachings that will keep us together. The lessons he taught will not be forgotten by any of those whose lives he has touched. Although the loss of Roman has left a big hole in all of our hearts, the school, and his legacy, will continue on.

Roman’s legacy indeed is his school. He spent the better part of two decades coaching thousands of players. In the beginning, in 1993, Roman undertook this endeavour by himself. However, his school has since grown to include several great coaches and an extremely dedicated staff. He was proud of all of them and he entrusted them to carry on with his dream and his life’s work. Anyone who has walked by the Tulis home field in Burnaby can see that Roman did not overestimate their skill and their dedication.

This spring marks the one year anniversary of Roman’s passing and although he is no longer physically by our side, he is in all of our hearts and therefore, a part of him will always live on.

Tulis Built An Unmatched Soccer Legacy.
One of B.C.’s most successful coaches succumbs to cancer 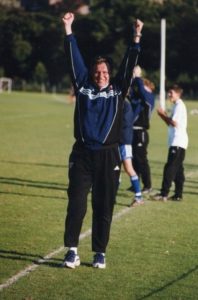 Roman Tulis, whose elite Burnaby-based soccer school turned out top-flight players both at home and around the world, died Thursday night after a long battle with cancer. The Czechoslovakian-born immigrant, who was in his mid-50s, was surrounded by family.

Tributes began pouring in Friday for the man who did so much to boost the game in B.C. Whitecaps president Bob Lenarduzzi praised Tulis for professionalizing coaching in Vancouver. Through his soccer academy, “he paved the way for what has ended up being a lot more people making a career out of the game here in B.C.” Lenarduzzi particularly admired the way Tulis stayed away from petty infighting. “I always found him to be a really class act. He seemed to rise above the competitiveness of the coaching fraternity,” said Lenarduzzi. “He did his thing. He did it quietly and he did it very well. He was just a really pleasant fellow. Whenever you saw him, he had a smile on his face. He didn’t want to argue about politics in soccer. He just wanted to coach.”

Bjorn Osieck, chief executive with the B.C. Soccer Association, described Tulis as a leader and a gentleman within the game as well as a successful entrepreneur. Besides complementing the work of the soccer association, Osieck noted that Tulis was recognized in Europe and by FIFA, the world governing body for soccer. “He was an outstanding and distinguished soccer expert and as such, his loss is certainly very painful and unfortunate.” Indeed, …

U-13 Girls Hold Their Own against Europe’s Finest 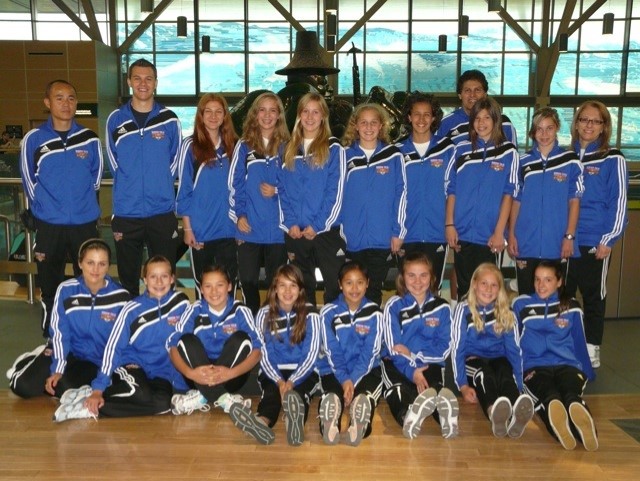 There is a saying in the football world that sums up the beauty and ugliness of the game very succinctly: “That’s football”. This year, the 1997 girls’ team went to the Dana Cup in Fredrikshavn, Denmark and the Gothia Cup in Gothenburg, Sweden and they were educated in the true meaning of this footballing proverb.

The girls started their trip with the usual 20-some-odd hour journey from Vancouver to Fredrikshavn and were greeted 15 hours after their arrival by the Swedish club Vasalunds IF. Tulis’ girls scored late in the first half and weathered the opposition’s attempts to level the score for an important 1-0 victory to open the tournament. Following a 12-0 win against IL Eiger of Norway, the Tulis Girls were on top of their group requiring only a draw in their final game to ensure that they won the pool.

June 2010 – The first annual Roman Tulis Memorial Alumni Game could not have asked for better conditions. The sun was shining, the temperature was ideal and over 150 people where on hand to take in the game. Throughout the years, many young boys and girls have been a part of the Roman Tulis Soccer school, and on this day over 30 of them returned as adults to pay homage to a coach that touched all their lives, with more players on the sideline due to injury.

The teams were split by birth years, with the odds years on one side and the even years on the other. The game started unlike most others, as there was a coin toss for the coveted blue Tulis jerseys, rather than for ball or side. As referree, and former Tulis parent, Tom Huggon called “heads”, the Odds team captain Russell Huggon grinned and grabbed the blue jersey. After sorting out starting line ups, taking team photos, and a one minute silence to honour Roman, the game finally started. The Odds held a decided advantage in scoring chances although they only had a 1-0 half time lead to show for it. Following half time, the Odds finally broke down the Evens defence for three more goals. Despite having as much ball possession as their opposition, the Evens were unable to create many scoring chances and had to settle for a single consolation goal, with the game finishing 4-1 for the Odds.

U-13 Dana Cup Champions Receive Award from City of Burnaby

As the U-13 Tulis girls prepare for their upcoming soccer tournament in Sweden and Denmark this coming summer, the City of Burnaby took time to recognize the accomplishments of Tulis’s 2009 boys group who brought home the first place trophy from Denmark’s prestigious tournament last year. On February 15, 2010 Burnaby Mayor Derek Corrigan, presented the Roman Tulis U-13 boys, the 2009 Dana Cup Tournament Champions with an award to recognize their huge accomplishment.

Mayor Corrigan also presented the Roman Tulis Soccer School with an award which read, “In recognition of your many years of dedication and commitment to youth soccer. On behalf of the Burnaby City Council and the citizens of Burnaby, thank you for promoting sport and excellence and for teaching our youth to be the best they can be.”

Tracking Tulis alumni around the Globe

“Up!” comes the call. All eyes turn skyward as the ground is battered by a conflagration of sweat and rain, equals as they hit the earth. Time slows as heart beats race, and just for a moment, everything is still. Pulled shirts hang stretched, each thread a measure of desire as its wearer defies gravity in the search for glory. The game is universal. The game is beautiful. The game is football. It is all-knowing, all-seeing, and all-reaching in its ubiquity, yet never more than a few kicks away. In football, as in life, it is the moments that live on in memory.

For the hundreds of players whose hearts have raced on the pitch at Roman’s school, moments were made on a daily basis. Whether a game-winning goal scored at practice, or the spine-tingling feeling of European gold sliding around their necks, the rewards of hard work were omnipresent for the generation of players who truly were the best they could be. But as each moment passes, space is made for new ones; new sweat, new desire, and new glory. As you read this, Tulis alumni are literally scattered throughout the world, connected by their love of the beautiful game and by the moments that led them to where they are today. But there is always room for more. Will you be the next to join them? It all starts by looking up.

Kevin Harmse: A testament to the strength of character Roman built in each of his players; Kevin has been a key player on the MLS stage for the past few years, playing for such top clubs as the Los Angeles Galaxy, Toronto FC, Chivas USA, and most recently, Houston Dynamo. Unfortunately due to injury, he was waived for the 2010 season.

Roman Tulis Jr.: Proof that thinking is part of the game, Roman’s son, Roman Tulis Jr. made the most of his soccer smarts in achieving a full ride scholarship as a student-athlete to the University of Illinois at Chicago. Now currently studying medicine at the University of Alberta, Roman Jr. is on track to become Dr. Tulis; and if the past is any indication of how the future might unfold, his prognosis is quite promising.

Marcus Haber: Currently on the books of West Bromwich Albion, a recently promoted Barclays Premier League club, Haber is one of the few Canadian talents to penetrate the highly competitive English soccer market. Currently on loan at St. Johnstone of the Scottish Premier League to further develop, Marcus is a prolific talent whose resume of professional clubs includes the likes of Leeds United and Vancouver Whitecaps FC. He unfortunately sustained an injury on his knee for which he received surgery in November of 2010, but will surely return to claim his rightful place in the upper echelons of world football.

Niall Cousens: The most recent Tulis export, Niall has completed the circle of Roman’s soccer dream, now playing for Slavia Prague, one of the top clubs in the Czech Republic. At only 19 years of age, Niall is looking to be a hot prospect in European football, and the standard to which all aspiring Tulis players will be measured for the foreseeable future. Youth, however, does not prevent injury as Niall too has been plagued by misfortune; a hamstring injury in early January put his preseason schedule on hold. But things are looking up for the starlet striker as his recovery has much quicker than expected, meaning that he’ll be back on the pitch terrorizing defenders in a few short weeks.

Terry Dunfield: Dunfield made his debut for Canada’s senior team in a 1-1 draw against Venezuela on May 29, 2010. Signed with Vancouver Whitecaps in 2010 and had 7 appearances and is currently signed with them for the 2011 MLS season.

Gianluca Zavarise: Zavarise earned his first call-up for Canada on 14 May 2010 for the friendlies against Argentina on May 24, 2010 and Venezuela on May 29, 2010. He did not make an appearance against Argentina but did start in the 1–1 draw versus Venezuela. He joined the Greek club Iraklis FC for 2010-2011 Season