U-13 Girls Hold Their Own against Europe’s Finest 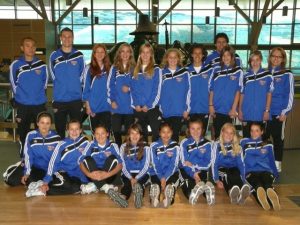 There is a saying in the football world that sums up the beauty and ugliness of the game very succinctly: “That’s football”. This year, the 1997 girls’ team went to the Dana Cup in Fredrikshavn, Denmark and the Gothia Cup in Gothenburg, Sweden and they were educated in the true meaning of this footballing proverb.

The girls started their trip with the usual 20-some-odd hour journey from Vancouver to Fredrikshavn and were greeted 15 hours after their arrival by the Swedish club Vasalunds IF. Tulis’ girls scored late in the first half and weathered the opposition’s attempts to level the score for an important 1-0 victory to open the tournament. Following a 12-0 win against IL Eiger of Norway, the Tulis Girls were on top of their group requiring only a draw in their final game to ensure that they won the pool.

The final group game was a battle for first place against Tölö IF of Sweden. The Tulis girls pressed hard at the start of the game and were unlucky not to have a lead in the first 10 minutes. With minutes left in the half, a single Tölö forward broke away from the play and was able to slot the ball in the far corner. This would be their only chance of the game. The Tulis girls played the majority of what time remained in the opposition’s half but were unable to equalize. Despite the loss, the Tulis girls had a semi-final date with Darlington Fusion FC of Ontario.

Darlington was able to capitalize from a scramble that followed a corner kick to take the lead only 5 minutes into the semi-final game. The remainder of the half led to a few chances for Darlington but the Tulis girls were unable to create anything. All that changed in the second half with the Tulis team being invigorated by a fresh start. They pushed their opposition hard but could not muster up a goal, despite creating several clear cut chances. The game ended 1-0 for Darlington in a match that could have gone in either team’s favour which made defeat that much harder to swallow. Darlington went on to win the tournament with a 5-0 route as the Tulis girls watched on.

The next day, the Canadian girls were aboard a fast ferry from Fredrikshavn to Gothenburg for the Gothia Cup. All three group games in this tournament would pit the Tulis girls against Swedish opposition; their first being against Södra Sandby IF. This game ended in a 0-0 draw following at least a dozen scoring chances from the Tulis girls. Following the game, an onlooker told the team that they were “sorry you didn’t score” because the only thing the girls didn’t do in the game was get the ball across the goal line.

The second group game was against perennial under-13 Gothia Cup powerhouses Boo FF. This Swedish club was finalists 2 of the last 4 years and had reached the quarterfinals each year for the previous 4 years. Despite the Swedish team having a distinct size advantage, the Tulis girls managed to repel all of Boo’s attacks and had a few chances of their own in a first half that was played mostly in the centre of the field. With the game 0-0 at half time, the Tulis girls started to attack with a little more urgency, hitting the cross bar with 10 minutes to go. Then with less than a minute left, Boo scored to make it 1-0 from a scrambled free kick. The opposition coach was quite impressed by the skill and strength of our “small” girls and uttered an astonished, “Wow” following the match.

The Tulis girls now headed into the final group game needing a victory. The final match was against another Swedish club known for their strong girls clubs; Torslanda IK. This match took place in a small stadium on the outskirts of Gothenburg and prior to the game the Canadian girls donned black armbands in memory of Roman Senior. Our Swedish hosts were kind enough to take a moment of silence to “remember the founder of the Roman Tulis football club.”

The Tulis team had several chances before going up 1-0 halfway through the first half on a breakaway. Minutes later, the girls almost doubled their lead with another breakaway, this time going off the post. A few minutes before half time, Torslanda scored to draw level. The start of the second half saw the Tulis girls with several chances, most notably a long bomb that hit the post and was cleared off the line by a defender. As the game drew on, the girls became more and more desperate as they knew only a victory would suffice. With minutes left, Torslanda scored a fluke goal and the Tulis girls’ dreams were crushed.

As the girls hung their heads and boarded the shuttle bus that would transport them to the train station, their sad faces touched the heart of their bus driver who had chauffeured them around the city for the past 3 days. As the girls collected their gear from the bus, he stopped them so he could say a quick word. He told them they were the happiest and nicest girls he had ever met and although they did not win on the field today, that in his heart, they were all winners. Many eyes on the bus began to water, but what really made the situation surreal was a Mexican team that had just boarded the bus moments earlier who started a chant of “Canada, Canada, Canada.” It was a scene straight out of Hollywood!

Despite the fact that the Tulis girls were not outplayed in a single game during the tournament; the girls came third in the group and were knocked out of the A-Playoffs. The girls would have to settle playing in the B-Playoffs. In the first round, they faced Torup/Rydö FF of Sweden. After going down 1-0 in the first half, the girls equalized early in the second half. In the dying seconds of the game, with a penalty shootout quickly approaching, a long bomb from 30 meters out hit the post and fell into the back of the net to send the girls into the quarter-finals. Here the girls would face EIK of Sweden. From the kickoff, it was apparent that Tulis was the better team. However, after 10 minutes, there was no score. It was still 0-0 at the half with the Tulis girls having all the chances but no luck. As the end of the second approached, the girls grew frustrated with their inability to break through the Swedish defence despite possessing the ball for the majority of the game. The final whistle blew and the teams lined up at centre for a shootout. Finally, the difference in skill shone through as the Tulis girls scored on four consecutive penalties to win 4-1. The girls were going to the semi-finals!

Four teams remained in the B-Playoffs (Tulis, HJK Helsinki, ASD Real Libertas Como, and Athletic Madrid) and the quality of these teams was underlined by the fact that they had conceded a combined total of 2 goals heading into the semi-finals. The Tulis girls would face Athletico Madrid, the former club of Fernando Torres, and a team that had outscored their opposition 14-0 in the last two games. The Tulis girls definitely had their work cut out for them. As the game started, it became apparent why the Spanish side was outscoring their opponents so heavily as they played the beautiful Spanish football that won their country the World Cup less than a month earlier. Despite fighting hard, the Tulis girls found themselves outscored 2-0 at half time following two spectacular top corner shots. Instead of letting these results get them down, the Tulis girls responded in typical Tulis fashion and the following half was a complete 180 degree turn and the Canadian girls came back and played with the confidence, skill, and flair that have come to be expected of Tulis teams. Athletico faltered as the girls took to the offensive. Wave after wave of attacks were thrown at the Spanish defence. However, despite several clear cut chances, the Tulis girls were unable to score and the game finished 2-0 in favour of Athletico, who would go on to win the B-Playoffs with a 5-0 victory against Como the following day.

The tournament ended and the girls prepared to return to Canada. There were obviously some very sad faces following the game. However, those feelings of sadness quickly dissipated as the girls realized that although they did not bring back any trophies, they brought back some things that were equally valuable; wonderful memories, challenging experiences, and newfound friendships that would last for the rest of their lives. And as Roman Senior always reminded all of us win or lose: “Winning is nice, but it’s not everything. It’s the experiences in life that build character.”