The 17th of June was pegged by weather forecasters as a chance for Vancouver to showcase its infamous west coast hospitality in the form of liquid sunshine. However, Roman Sr. was clearly smiling alongside his alumni as the sunshine beat out the clouds in the first of many spectacular feats on the day. Perhaps only slightly more spectacular was the smell surrounding the training field, as instead of sweat and tears, the sweet aroma of European sausages greeted parents, players, and spectators alike as they made the time-honored trek to the Tulis facility. While Friday afternoon traffic held up the proceedings somewhat, it was clear as the Alumni warmed up that they were ready to shift to the heavy gears in memory of their beloved coach. Such was Roman’s kindness and charisma that hundreds showed up to celebrate the things that he valued most: family, charity, and – of course – soccer. With the BCCCPA on site to accept donations in support of families burdened by the stresses and financial woes of childhood cancer, games and contests for children young and old, and a fantastic evening of soccer ahead, Roman’s cleat prints were hard to miss while walking the venue.

As the match kicked off, everyone had an excellent chance to watch firsthand some of Vancouver’s finest soccer talent in the form of the RTESSE alumni; none had a better view than the guest of honour, however, as Roman’s presence was palpable in every touch, shot, and tackle. Marcus Haber, Kevin Harmse, and Kent O’Connor – to name just a few – were some of the Canadian soccer legends who pulled on their old training attire and donned their boots in celebration of his legacy. As the rain continued to hold off, goals were instead pouring from the sky as the blue team raced to an early lead. The players’ energy and enthusiasm must have been contagious as spectators bid generously for some truly incredible prizes – including a Canadian National Soccer Team jersey donated and signed by notable Tulis alumnus Terry Dunfield – which helped to raise much-needed funds for the BCCCPA. As the match wore on, alumni young and old battled together in a match characterized by Roman’s trademark determination, technique, and sportsmanship. Goals seemed to be a common theme of the evening as the blue team added to their tally with the white team stealing a few ones late to keep things interesting.

And as quickly as it had begun, the final whistle brought to a close the Second Annual Alumni Charity Match, returning smiles to some very tired faces and sending prizes to some very happy homes. In what was a great evening of soccer, even greater things were accomplished for charity; Roman is undoubtedly proud of everyone who attended, whether in person or in spirit. As is the Tulis philosophy, we will continue to strive to make this event the best that it can be, and so look forward to having you join us next year for the third of what we hope will be a long line of Alumni Charity Match fixtures! 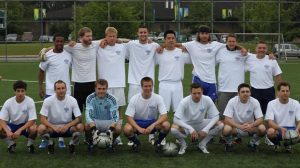 A Special THANK YOU to our 2011 Match Alumni Sponsors