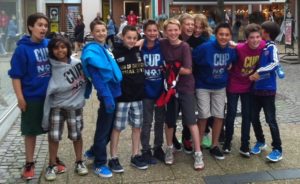 In what was a tightly contested, high scoring match, the Roman Tulis European Soccer School of Excellence’s U12 boys emerged victorious at the 2012 “Cup No. 1“ tournament in Denmark last week.

Earlier in the week the jet lagged Roman Tulis U12 boys opened the tournament against a team from Strandby, Denmark. After going down a goal early in a nervy start vs. this Danish team, the Roman Tulis boys recovered to open their campaign with a 3-1 win.

The following day the Tulis boys breezed past local side Bangsbo Freja 5-0 and that afternoon they secured their spot atop the group with an emphatic 8-0 victory over Uraedd FK of Norway. Then building on the momentum, the Tulis boys took Scandinavia by storm in their final group stage games.

The boys were now into the semi-finals. Set to face a perennially strong Bremerhaven side. The Tulis boys needed to draw upon their many years of Tulis training to progress to the finals. In a tightly contested match that saw chances for both teams, the Canadian boys managed to slot home 10 minutes from time, providing what turned out to be the winning goal. Now just 50 minutes away from writing their names in the record books, the boys were doing everything they could to prepare themselves for a tough clash against hometown favourites FFI.

For spells of the final match of the tournament it looked as though a Tulis win was all but assured, but some creative attacking from the relentless Danish side kept everyone wondering until the final whistle blew. Long time Tulis player, Gerardo Villavicencio was also named “Man of the Match” for the final.

For video footage of the final match please visit: http://www.youtube.com/watch?v=04TD7__QhoA