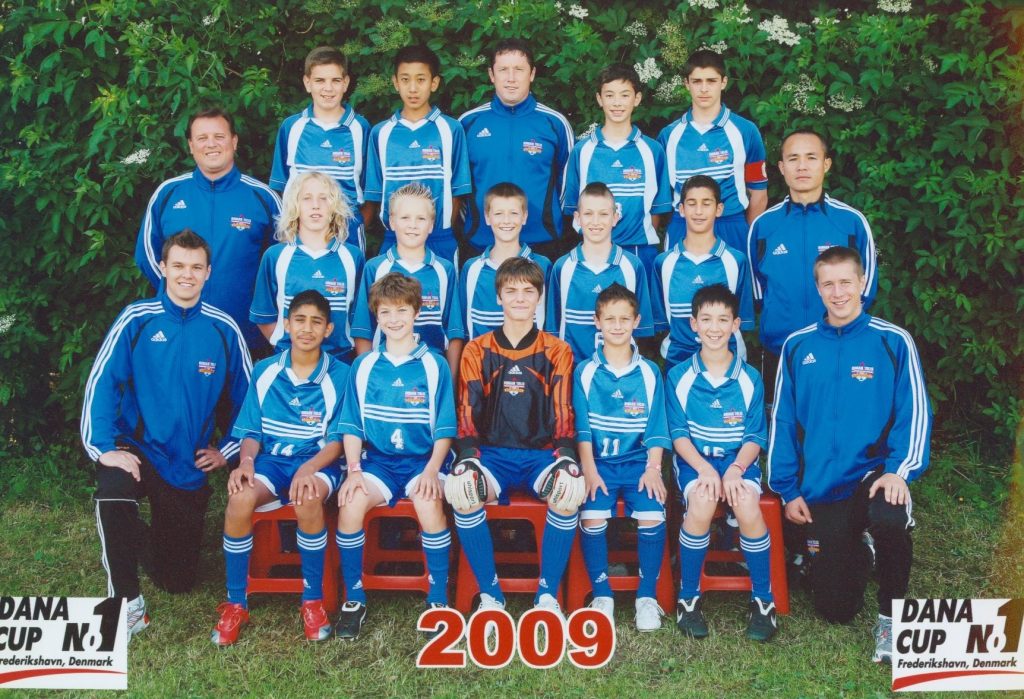 This year’s European tour to Denmark and Sweden was nothing but a huge success for the U13 boys. At the Dana Cup Tournament in Denmark, they finished 1st in their group stage with 7 points (2 wins and a tie) scoring 11 goals and not conceding any. This was the second-ever Dana Cup championship for the Tulis boys groups. Going in to the “A” playoff matches, their 1st big task was in the quarter finals against Orgryte IS, 3rd largest professional club from Sweden. The Tulis boys played with a lot of heart and determination and scored on a free kick 25 yards from the net with only 3 minutes left in the 2nd extra time to win the game 1-0 and move on to the semi finals.

Later that same day, the boys faced a very talented home team from Denmark, F.f.I. which they beat 2-1 and found themselves in the final the next day against a very strong, high scoring team from Germany, STD Bremerhaven. The boys were able to shut down the German attack and the game was scoreless in regular time with the Tulis boys capitalizing on one of the few chances they had in the 3rd minute of the 1st extra time to make the score 1-0. They were then able to hold off the Germans for the final 17 minutes of extra time to win the 2009 Dana Cup. “What excitement in the stadium when the final whistle blew,” said team manager Andy Sulentic. “The atmosphere was electric; the boys will remember that moment for the rest of their lives!”

That same day, the boys travelled to Sweden to prepare for the Gothia Cup. After the group stages, the boys qualified for the A Playoffs, finishing 2nd in their group with 5 points; 1 win and 2 ties with one of the ties coming against IFK Goteborg which was a huge accomplishment! In the playoffs, the boys faced a very physical and large team from Morocco, Sporting Atlantic SC. They played with fierce determination and heart as they did in all their games, and were able to shut down the other team’s attack and scored in the 3rd minute of the 2nd half to win the game 1-0. The next morning they found themselves having to play against the largest youth club in all of Europe, IF Brommapojkarna from Sweden. With 6 players suffering from minor injuries and not 100% fit, the Tulis coaching staff knew this would be a tough game to win. The boys played very hard and were very tight on defence, but eventually the Swedes were able to break their back line with 11 minutes left in the game. The Tulis boys gave it all they had to try to equalize the score and appeared that they just might have done so with a couple of dangerous attempts on net. Unfortunately, in the last 5 minutes the Swedes were awarded a penalty shot which sealed their victory. The Tulis’ team drive for their 2nd trophy was stopped in the 16th finals! IF Brommapojkarna finished 3rd overall in the tournament having lost to the eventual Gothia Cup winners in the semi-finals! There were a total of 118 teams in the U13 Boys age group.

The 1996 boys finished both tournaments with 8 wins, 2 ties, and one loss. They scored a total of 18 goals and conceded 4 goals with two of them coming from penalty shots. After the Gothia Cup, Roman Tulis Sr. was quoted saying to the players via Skype that “The 1996 boys will be written in to the Roman Tulis Hall of Fame” for their accomplishments! Upon returning home to Vancouver, Roman Tulis Jr. was quoted in the Burnaby Now Newspaper on August 1st saying, “It’s not just the skill, it’s the boys attitude and teamwork, too. You can have good players, but a good team wins you games.”