Tulis U13 Girls Prove To Be Very Strong Contenders 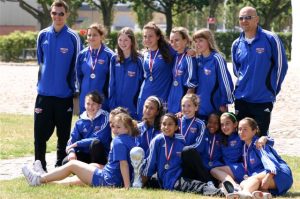 Back in 2001, the U13 Tulis Girls brought home the coveted Dana and Gothia Cup 1st prize trophies becoming the first Canadian team to ever do so and this year our U13 girls set out to follow in their footsteps. Despite their best efforts this was not in the cards for the girls in 2008; however, they did not come away empty handed. Their teamwork, work ethic, and never-say-die attitude proved them to be one of the strongest contenders in both tournaments and they earned themselves the 2nd Place award from the Dana Cup Tournament in Denmark.

Their Scandinavian tour started out in Frederikshavn, Denmark at the Dana Cup tournament. In the past 25 years more than 88 nations have participated in this prestigious event with more than 6000 teams and 300,000 visiting Frederikshavn. The girls had a competition of 11 teams from Denmark, Germany, Iceland, Norway, Sweden, and the USA. Their first game was against Ekhagens IF from Sweden and here the girls set the tone of their play for this tournament; they came away with a final score of 6:0. They went on to play IL Eiger (Norway); the Tulis girls dominated the play and came away with a 5:0 win. By the third game against Thor Akureyri (Iceland), the girls’ jetlag started to catch up with them and they could not capitalize on their chances and lost this game 0:2.

In the quarterfinal game against Ry Sportclub (Denmark) the girls came out strong and came away with a 3:1 win and moved to the semi-final game. The semi-finals did not start well for the Tulis squad. In the 1st minute, out of nowhere, came a free kick from more than 30 meters and the ball (with the help of the strong wind) found its way into their net. This only served to invigorate the girls who then started pressing the opponent all over the field and their hard work paid off and soon the game was tied. In the second half, both teams played an excellent defensive game, trading off few chances. The game finished with a tie even after two five minute overtimes and went on into a penalty shootout which the Tulis girls won and advanced into the championship game.

The final game was against Benson Soccer (USA); this game was the third final of the Dana Cup where the Tulis girls met this squad. In the two previous finals the Tulis girls lost in penalty shootouts and therefore, this time our strategy was very simple; start aggressively and win in regulation time! Both teams played an excellence game trading off few chances. The game finished with a tie even after two five minute overtimes and again the Tulis girls found themselves in a penalty shootout which unfortunately went to the Benson squad.

In week two of their trip, the girls moved on to Sweden to compete in the Gothia Cup Tournament which is one of the largest youth tournaments in the world. This year’s event boasted of well over 35,000 players and coaches representing 67 countries. The Tulis girls finished second in their group, with a 2 win, 1 loss record.

They opened the tournament beating Kungsbacka IF (Sweden) and the second game found them paired with LB 07 (Sweden) and once again the Tulis girls dominated the play and came away with a 1:0 win. They then moved on to meet AIK FF Stockholm (Sweden). The gusty wind proved to be a decisive factor in this game when in the 1st minute, an AIK player took a long shot off the wing (from about 25 meters) and despite the fact our goalie got a touch on the ball, she could not manage to get it high enough to avoid the goal. The girls fought hard to get the equalizer goal but unfortunately came short and came away with their first loss of the tournament.

However, they earned right to compete in the play off round and their first opponent was to be Benson Soccer (USA). This game was a repeat of the Dana Cup final, and the girls were pumped and ready to fight. However, once again the girls gave up an early goal on a long, floating shot from about 20 meters. They then regrouped and started pressing their opponent; they scored on a “rocket shot” in the 22nd minute tying the game and then scored once again in the 2nd half.

In the quarterfinal game, the girls met PK 35 (Finland) and dominated the first few minutes. However, it was the PK 35 player who scored in the 5th minute and in the 19th minute the Tulis girls scored on a penalty shot. For most of the second half, the Tulis girls were under pressure and defending; trying to secure their spot in the next round. Unfortunately the match ended in a tie which sent the game into a shootout match in which our girls lost 2:4

All in all, the girls competed extremely well and once again proved that Canadians can compete with Europe’s finest and come out on top!