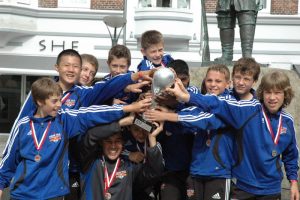 Winning a soccer tournament is not easy. Winning a soccer tournament in Europe, some say, is nearly impossible. The Europeans have soccer in their blood; they take the game very seriously. They are out to win. The Roman Tulis U13 boys’ team went to Europe to compete, to see first hand what “football” in Europe was all about, and to see how they measured up with their European counterparts. They knew that it would take all of their skill, discipline, and determination to do well and they gave it everything they had. In the end, they proved to themselves and to the Europeans that they did indeed measure up when they earned themselves the 2nd Place trophy from the Dana Cup Tournament in Denmark.

In the first game of this tournament, the team played “Thor Akureyri” from Norway. With no benchmark to start the competition, it would be the team’s first test on European soil. The boys jumped to an early 4-0 lead and despite a long trip and jet lag, they looked in complete control throughout the game. Day two they faced the best team of the tournament, Club do Futebal de Odivelas from Portugal. The Tulis boys played an excellent match again their Portuguese opposition and the game finished with 0 – 0 draw. Game three saw a dominant performance once again by the Canadian boys against Brummendal (Norway) and it was then off to the quarter finals.

The Tulis boys came away with a 2-0 victory over Alno IF from Sweden which earned them a spot in the semi-final match. Their opposition in this round was against IL Eiger from Norway. The Tulis team had worked extremely hard to get this far but their ultimate goal was to play in the championship final and they would have to be very disciplined and keep their focus on winning the game in hand against an equally determined Norwegian team with a huge and very vocal fan support. The Tulis fans were not to be outdone. While not the biggest group in number, they were by far the tournaments best in their support, cheering, and camaraderie! The Canadian flags and Roman Tulis signs dominated the sidelines to support the boys.

The game ended in a 1–1 tie ending the Tulis boys’ 4 game shutout streak. Now they had to collect themselves and face two seven minute overtime periods to earn their place in to the Dana Cup final. They would have to draw upon all their Tulis training, stay focused on the goal, and give 110 percent to reach the final. They gathered their strength and marched back onto the field playing with every ounce of strength and heart. Their break came five minutes into the overtime period when the boys capitalized on a loose ball in the Norwegian box; heading it in to score. The elation for the players and fans was only tempered by the long seven minutes of extremely intense soccer with two balls cleared off the line, and another deflected by our goalie off the crossbar. One final header into our box went wide and the boys were through to the finals. It was perhaps the most intense and emotional game ever played for these boys. The Tulis team moved on to the championship game facing their rivals; the Portuguese.

The Portuguese did not want a repeat of the game two draw and would do anything to win. A free kick from 45 feet resulted in a goal against us in the 8th minute. The second goal came in the 20th minute, after a Portuguese corner ball made it into the Tulis box. It was difficult to penetrate the Portuguese half. Their strong defensive line constantly frustrated the Tulis attack. Through the second half, the Tulis boys’ defense was outstanding, keeping Odivelas away from dangerous scoring positions. However, the Portuguese were very physical and near the end of the game, our Captain was taken down by a high kick. He was taken off the field to hospital in a stretcher and would have to sit on the sidelines for the remainder of the trip with a broken collar bone; a major void and role to fill for our boys. The final game ended in closely contested 2 – 0 loss, but it was hard fought and these two teams were by far the best in the tournament.

The next day the tour continued with a two hour ferry ride across the North Sea to Gothenburg, Sweden and the Gothia Cup Tournament. The boys’ first test would be Rijeka from Croatia the next morning. Unfortunately, the Tulis team could not find enough momentum to score after the travel, the previous tournament high, and the loss of their captain. The Tulis boys then played Vasalund from Sweden. They played well but could not find a way around the solid defense to score and the final score was 1-0 for Sweden. The final game was against SK Sprint/Jeloy from Norway. The Tulis boys had many shots that barely missed the net and they looked the dominant side and had all the momentum to score. But it was not to be. The final score was 2-0 for Norway, ending the Tulis team’s tournament.

Throughout the trip, the Tulis commitment and standard of play never faltered. They never let up and played each minute with all their skill, discipline, and intensity. They also played with all their collective hearts and respect for one another. No one could have asked for or expected any more. In the end, hoisting the silver trophy at the Dana Cup tournament high above the podium with hundreds of fans cheering was a sweet victory for this unknown and untested Canadian team. In both tournaments, the boys played with all their skill and heart and left an indelible mark. The Roman Tulis team continued its tradition of setting the bar high in international play and they will always remain true to the Roman Tulis’ motto – “Be the best you can be”.