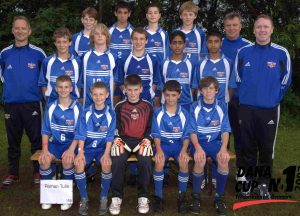 July 14, 2007, Frederikshavn, Denmark: In a hard fought final at Frederikshavn Stadium, the Roman Tulis U13 boys team won the Dana Cup “A” final and earned the gold trophy as best U13 boys team. The win marked the first time ever that a Tulis boys team and, in fact, any Canadian team, has won gold at this prestigious youth tournament.

The path to victory had a number of challenges. During round robin play, the Tulis boys defeated teams from Sweden and Norway including a youth team from FK Bergen Nord, a major Norwegian football club. The Tulis boys dominated play with intelligent and creative football, often maintaining possession for long periods of time. When the ball was lost, the team defended with ferocious tenacity and permitted very few goal scoring opportunities despite the physical aggressiveness of their opponents. The U13 boys completed round robin play with a 3-0 record and 8 goals for and none against.

The playoff rounds provided a different learning experience for the players. Their quarter final opponent, Club J.B.M. from Colombia, was a skilled and passionate team and in the words of one Tulis player, “We definitely underestimated them”. Less than 10 minutes into the match, the Tulis boys found themselves on the wrong end of a 1-0 score and had to refocus to take control of the match. Despite the initial set back, the Tulis boys managed to impose their dominating style on the Columbians and emerged with a 2-1 victory. Roman Tulis and the boys were gracious victors, however, and posed with the Columbians for a number of group photos afterwards.

The team continued its display of creative football in its semi-final game with FC Suderelbe of Hamburg. From the opening whistle, Tulis’ boys challenged hard for every ball, preventing their opponents from moving the ball downfield on long clearances. Once the Tulis boys gained possession, they attacked smartly, moving the ball forward with quick passing and very clever off the ball movement. Combined with some superb goalkeeping to preserve the shutout, the team moved onto the finals with a well earned 3-0 victory.

The Tulis boys continued their outstanding play in the final game versus Orgryte IS of Sweden. After taking an early 1-0 lead, the team continued to seek additional markers only to have two goals called back due to some questionable officiating. Despite this and some late pressure by Orgryte, the Tulis boys prevailed as tournament champions. “The boys showed great discipline and maturity throughout this tournament,” said Roman Tulis. “Their style of play was outstanding and clearly reflects the philosophy and quality of training they have been receiving at the School. I am very proud of them.”