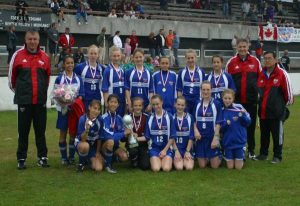 This past July the RTESSE ’92 girls were in Europe to compete in two very prestigious soccer tournaments.

First up; the Dana Cup in Denmark where the girls were pitted against two Swedish teams and an American Academy All Star squad from Colorado. The US team showed considerable skill and determination but could not keep pace with the Canadian girls who found themselves first place in their group after winning all their round robin games in clinical fashion and without conceding one goal.

The Tulis girls entered the playoffs against the second place team from Group 2; an American team from Dallas called Stars ‘n Stripes. Clad in uniforms that looked like American flags, it quickly became apparent that they thought they were playing NFL football rather than the “beautiful game”. From the opening whistle the Americans were extremely physical and tried to hit every player that moved. The first half was scoreless and, while the Tulis girls nursed numerous wounds, Roman preached patience, and the girls obviously took it to heart. Within ten minutes of the second half, they scored, and then put it out of reach with a second goal five minutes later.

In the finals the Tulis team met Benson Soccer from Seattle. This was an exciting experience as the game was played on the Stadium field, and both teams were lead in by game officials and flag bearers. The game began a bit tentatively on both side and just as the Tulis girls started to assert control; they unfortunately conceded an own goal off a long free kick. From that point on the Tulis girls completely dominated the game and eventually scored in the second half on a well taken strike from 20 yards. The game ended 1:1 and did not change during extra time, which again was dominated by the Tulis girls. The Benson team relied heavily on two tall center backs and a goalkeeper who was extremely talented and made many high quality saves. The game was decided on penalty kicks (5:4) which went in the Benson team’s favour. It must be noted that if draws were still determined by corner kicks, the Tulis girls would have easily prevailed about 10:0! By the end of the game, the stands were full of other teams all cheering on the Roman Tulis Team, who clearly put on a clinical display of passing and possession soccer. Tulis’ Jaclyn Sawicki was name tournament MVP.

Week two, the girls traveled to Gothenburg for the Gothia Cup; the largest youth soccer tournament in the world. 2005’s event boasted 1,500 teams from more than sixty countries. During the tournament, the entire city of Gothenburg turns into one huge tournament site. All the buses and trams were free for competing teams and were jammed full of footballers from around the world. Our girls were one of 44 teams in their age group. During these games Tulis Canada again showed their dominance against teams from Sweden and Norway, winning them all quite handily. The first playoff round was against a team from San Francisco, who held their own against the Tulis girls for the first half but could not handle our attack when it came to life early in the second half. The Tulis girls won 4:1 which put them into the quarter finals against Benson Soccer once again. Like a bad dream, the game mirrored the Dana Cup final. Again Benson packed the box, cleared everything they could and relied on their ‘keeper to handle the rest. Even though the Tulis girls controlled play from the outset, the game ended 0-0 and Benson again prevailed on penalty kicks. Benson went on to win the tournament (all their games were won on penalties). It is significant to note that the Benson coach was overheard admitting that despite his result against Tulis Canada, he acknowledged that the Canadian girls had played better soccer.

“This has been a fabulous two weeks,” says parent and manager Glen Williams. “All the players and parents are very grateful to Roman for leading us on this memorable trip.”