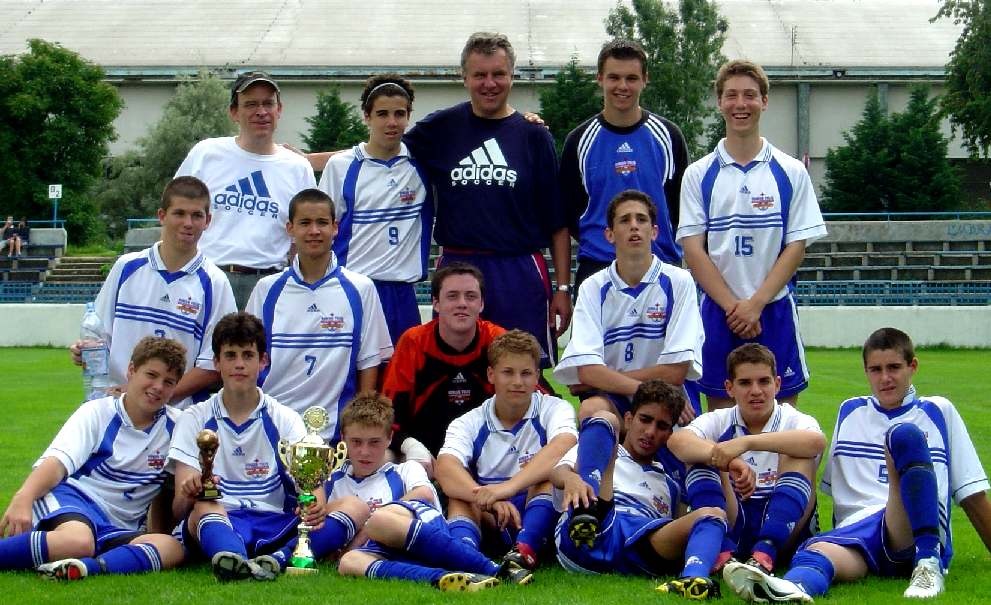 This past spring, the RTESSE U-15 boys did a two week tour of Slovakia, Roman’s homeland, where they participated in the Tatra Cup International Tournament and the Nitra Cup International Tournament. The boys met up with some very strong competition from Russia, Latvia, Austria, Czech Republic, Estonia, Poland, and Slovakia (just to name a few) and managed to come home with first and second place trophies, tournament MVP and Best Goal Scorer awards.

The group started off in the High Tatras (Roman’s hometown) where Roman and the team received the royal treatment. Roman found himself somewhat of a celebrity being interviewed by local radio stations and having the team and himself asked as special guests of the mayor to visit the city hall. The High Tatras also found the boys up against 12 teams representing 7 different countries at the Tatra Cup International Tournament where they came away with the first place trophy and Tulis’ Marcus Haber was awarded the top goal scorer in the tournament.

The boy’s first game of the Tatra Cup, up against a Russian team found them on the winning side of a 3-2 final score and on the bad side of the Russian coach. The Tulis team was behind 2-0 after the first half but with enormous effort and teamwork, they stormed back in the second and managed to pull off a very crucial win.

The Russian coach apparently didn’t take the loss very well and was at quite a loss himself as to how he’d explain a defeat to a Canadian team! Later that same day, the boys met a local team (Dubnica) and played to a scoreless draw. The game was decided on penalty kicks with Tulis Canada winning 3-2.

This put the Canadian group in first place in their group of three. They went on to beat another Slovakian team, Humenne 1-0 in the quarter finals, and later that day, in the semi finals, they met Dubnica once more and at the end of regulation time were tied 1-1. The Tulis boys once again beat them in penalty kicks; the final out come was a 3-2 score. The final game for the first place title was against Zilina (a Slovakian Championship team) in which the Tulis team triumphed 3-1.

After a few days break, the boys moved on to the Nitra Cup International Tournament where they competed against four other teams in a straight round-robin format.

Their first competition was against the eventual winner, Nitra, and although the result was a loss, the Tulis boys gave them quite a game. Nitra scored their third goal in the 40th minute to make it a 3-0 game and that was all the Tulis boys would take. The game turned around in the 44th minute when Tulis Canada scored and just three minutes later, they scored again. Suddenly, the Canadians were within one goal. However, despite a great effort, the game ended in the boys’ one and only loss of the trip.

Next they played FC Vitkovice, a team from the Czech Republic, and won 2-1 and then Venglos Academy from Slovakia which ended in a 1-1 draw. The final game was against Premier Club Raba ETO Gyor, a team from Hungary. This was a must win for the Canadians as a win would push them through to second place and a loss would mean a fourth place finish. Tulis Canada opened the scoring in the 19th minute and then scored twice again in the second half and won 3-0 and captured the second place trophy. Tulis’ Marcus Haber was named MVP of the tournament.

The tour finished off with a special award ceremony hosted by the Slovakian Soccer Association in which Roman was awarded a Slovak National team #10 jersey (with R. Tulis on the back) in recognition of his accomplishments and for representing Slovakia abroad.