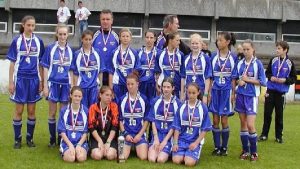 July 2003 – Dana Cup Tournament (Denmark): A bit disappointed after their first loss of the tournament in the final game; the girls display their medals for their second place finish

There’s nothing like arriving at a tournament sleep deprived and with frayed nerves. But Tulis’ U13 girls took this is their stride. After an extremely long and grueling journey – battling flight delays, extended layovers, and only a few hours sleep before their first game – the jet lagged girls came on strong in their first of two European tournaments this past July.
Running on pure adrenaline and excitement, the girls did not let a ball get by them for 4 straight games and won their division at the Dana Cup Tournament in Denmark with 24 goals for and 0 against. Their amazing scoreless streak saw them through to the semi-final game in which they held on for yet another shutout. At this point, the girls forgot all about their weariness and were pumped and ready for their final game. Their opponents were a very strong team from the USA and after an extremely hard fought two way battle; the Tulis girls came away with a 1:0 loss and brought home the tournament’s silver cup.

A bit disappointed but far from discouraged, the girls put the tournament into perspective and moved on to Sweden where they competed in the Gothia Cup Tournament. For the entry round, the girls once again kept the ball out of their net for three consecutive shutouts and came away with 26 goals for and 0 against. Unfortunately lady luck would run out and not see them through to the play-offs.

Up against IF Brommapojkarna, (who also had 3 wins: 19 goals for and 0 against) the Tulis girls gave it all they had, and it was an even up game at the half. Despite many scoring opportunities, the Tulis girls just couldn’t place one in the net, and their opponents scored twice before the final whistle thus squelching Canada’s entry into the play-offs.

Brommapojkarna went on to win the tournament. “Coaches from the other teams came over to talk to us after the game and commented that luck had not been on our side,” said team manager, Michael Hubbard, “They were also extremely impressed with our team’s skill and effort. One gentleman I spoke with who was with the Brommapojkarna team, mentioned numerous times that our game was the best U13 game that he had ever seen!” 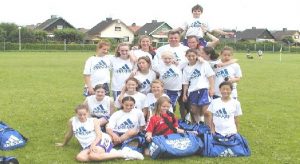 July 2003 – Gothia Cup Tournament (Sweden): The girls put things into perspective after a very emotional loss in their play-off game

“The girls did extremely well,” said Tulis, “They only played a handful of exhibition games as a team before we left, and they still managed to go into these two international tournaments and score 52 goals and have only 3 goals scored against them. Of the nine games they played, seven were shut outs. They won their group in the Dana Cup 24:0, and their group in the Gothia Cup 26:0. In the end luck wasn’t with them. What can you do? That’s sport! In the long run, it’s the experience that is beneficial to all these girls and it is the experience that will make them better players – not the hardware!”
Tulis – who always sees the glass as being half full – goes on to say that on the upside of being out of the tournament early, the girls found they had some free time on their hands before returning to Canada – time which they put to good use. The group spent the remainder of their trip acquainting themselves with the rich history and culture and the beautiful sights that these Scandinavian countries offered. The girls came home with many treasured memories of wonderful times spent with friends as well as their silver cup!