Roman Tulis’ U15 boys blasted their way into Dutch history books in May 2003 coming away with a spectacular third place finish beating top level youth teams Ajax Amsterdam and PSV Eidenhoven! European skeptics and naysayers had said it couldn’t be done, and even after the fact, loyal Dutch fans insisted that it must have been a game of Nintendo in which the Canadian boys were the victors against super club Ajax Amsterdam – not – heaven forbid a soccer game!

The boys, who had been on a two week tour of Holland, competed in the Invitational 18th Annual International OSM ’75 tournament in Maarssen, Holland. Tournament participants included NAC Breda, Ajax Amsterdam, PSV Eidenhoven, Sparta Rotterdam, and Luton Town (England) just to name a few. At the end of day one of the two day round-robin tournament, the Tulis boys found themselves in 4th place. They had won 2 of their 3 games, beating Luton Town (England) 1:0 and DWSM Maarssen 5:0. Unfortunately they had lost to Sparta Rotterdam 3:0, but they didn’t come away from that game empty handed.

Very valuable lessons had been learned. Day two, the boys took those lessons and were able to capitalize on the next few competitions. They won three of their four games. In their first, they scored in the third minute of the second half against Ajax Amsterdam and held on for an extremely exciting 1:0 win. Next they met NAC Breda and unfortunately, came up on the short end of a 1:0 score. It was an exciting game nonetheless, with a scoreless first half.

NAC Breda finally scored in the sixth minute of the second half and that was all the scoring needed. NAC Breda eventually went on to win all of their games and were the 1st Place champions of the tournament.

The Tulis boy’s third game was against PSV Eidenhoven, another of the ‘gold standard’ teams in Holland. There was no scoring in the first half. The Tulis squad scored at the nine minute mark of the second half and then again five minutes later and that was the end of that!

The boys were suddenly in the thick of the chase for the honors! Their final game was against the home team, OSM ’75 which they won 1:0 and captured their Third Place overall title. Needless to say, everybody was thrilled and very excited.

Ajax Amsterdam and the Tulis boys were tied with 15 points each at the end of the tournament, but Ajax finished ahead of the Canadian boys – taking the Second Place title – due to goal-differentials. There is no question that the Tulis School now has a standing, automatic invitation back to this yearly high level tournament.

During the boys two week tour of Holland, they played two tournaments and 13 games in total. They won eight, tied two and lost three. They had outscored their opposition 14:5. A truly ecstatic Roman Tulis said, “The boys should all be very proud of themselves. They did a fantastic job. They exceeded everybody’s expectations – including their own! Folks in Holland were truly impressed by their achievements.”

The weather has just dipped below freezing, rain is pelting down, wind is biting into exposed skin, and only the bravest of parents have ventured out of their heated vehicles – most have gone in search of the nearest and warmest coffee shop! Yet Roman’s legions are on the field enthusiastically focused on that evening’s lesson seemingly unaware of the elements. As they do their final stretches, a cloud of steam from the heat they have just generated hovers above them, and as they walk back to the dressing room you see them talking, joking, and laughing. It’s nights like these that remind us that there is so much more going within the school than just soccer training. This observation, something we’ve all seen, was pointed out by parent Lauren Peel in a speech given this past Christmas. Lauren, whose son Ryan will be graduating from Tulis’ program in 2004 after nine years (driving from east of Mission), went on to say, “For many of the (players), Roman’s (school) will be a constant from year to year when schools, teachers, coaches, and teams change. Roman has been a mentor for Ryan longer than any other teacher or coach, (and) the lessons learned weren’t limited to soccer.”

When Tulis first opened his school in 1993, his objective was quite simple. He wanted to provide a training venue that was intense and competitive, and one that would challenge players to become all that they could be. Over the years, he has not wavered from that objective, and with the success of his protégés in Canada, Europe, and the United States, there is no disputing the fact that he is doing something right. However, Tulis goes well beyond just providing a competitive environment.

He works hard to develop not only successful soccer players, but outstanding, well rounded people as well, and he is constantly reminding his players that “academics must come first and soccer second”. He knows that a professional European soccer career is the dream of many, but the reality of few, and for most players their future will be revealed in the diverging pathways that they will discover along the way.

In the past few years, players from the Tulis School have slowly been migrating south of the boarder to play on full or partial scholarships for US universities and colleges, and word of their success has spread like wildfire. In the fall of 2002, the school was overwhelmed by the tremendous interest from NCAA Division One American college and university coaches. Inquiries came from all over the States. Numerous coaches made special trips to the school to watch the players in action, and they were very impressed with what they saw. By autumn of 2003, Tulis’ Burnaby training facilities had become a regular stop-over for American collegiate coaches in search of new talent. 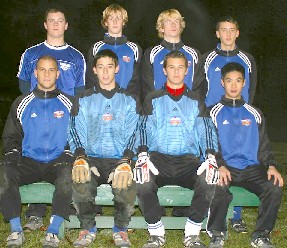 In the past few years, players from the Tulis School have slowly been migrating south of the boarder to play on full or partial scholarships for US universities and colleges, and word of their success has spread like wildfire. In the fall of 2002, the school was overwhelmed by the tremendous interest from NCAA Division One American college and university coaches. Inquiries came from all over the States.

Numerous coaches made special trips to the school to watch the players in action, and they were very impressed with what they saw. By autumn of 2003, Tulis’ Burnaby training facilities had become a regular stop-over for American collegiate coaches in search of new talent.

Roman is extremely proud of those players who have been picked up by US institutions and is very excited that the road has now been paved for the school’s younger players who wish to pursue a US education, but he is quick to point out that the fields south of the border are not his player’s only options nor is it his only priority. “My sincere hope for each of my players is that after they graduate from my school, they take their years of soccer training and combine it with their academics and excel in both, and it doesn’t really matter what country they do it in.” His graduating class of 2003 took that message to heart. The group consisted of ten players. Nine of the 10 have moved on to higher education; five have migrated south on soccer scholarships, four chose a university here in B.C., and one decided to forgo further education altogether and is currently playing professionally for a European Premier team and is a member of the Canadian U23 Men’s National team.
Regardless of which road they choose to travel, all Tulis grads take with them many life lessons taught by caring mentors, wonderful memories of times spent with good friends, and the knowledge that with the right attitude, anything is possible.

Lauren Peel summed up the past nine years with Tulis best with her MasterCard analogy: “Number of pairs of gravel cleats purchased – plus or minus 13; Number of uniforms – about 10 and more gallons of laundry detergent then I care to consider; Number of kilometres driven – at 160 km round trip, 8x per month, 9 years – about 120,000 km – just for Roman practices; Number of stops at fast food restaurants on the way home from practice – too embarrassing to admit; Number of European Trips: Four and lots of photos (and memories); The Roman Tulis Experience – Priceless!”