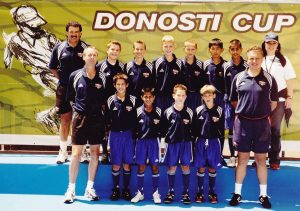 Burnaby’s Roman Tulis European Soccer School of Excellence’s U-12 boys were honored to be among the world famous soccer clubs who took to the field proudly carrying their countries flags in front of a crowd of more than 8.000 people during July 2002 Donosti Cup Tournament’s opening ceremonies held at Anoeta Stadium in San Sebastian, Spain.

The boys returned home with their heads held high after competing against some of Europe’s top youth teams and proving themselves to be worthy opponents to their European counterparts. Coaches for the eventual winner
of the U-12 Division, FC Barcelona, complimented the Canadian boy’s skill and commitment and told reporters that the “Tulis teams was the only team who gave us a good game!”

The boys played seven-aside soccer at this very prestigious tournament, and opened with a bang against a strong Spanish team from Madrid, A. D. Complutense. The boys felt somewhat jittery in the first few minutes, but soon gained control with quick, accurate passing and strong team play. The Madrid players showed a high level of skill, but by half time the Tulis boys led 2-0. The high tempo and end-to-end action continued in the second half. The Tulis players continued with their excellent team play and were able to capitalize more often on their chances, and prevailed 6-1 for a hard fought win against the players from Madrid. Day two brought them an equally strong team from North-Eastern Spain, San Ignacio from Navarra. But the Tulis boys came on very strong and were able to dominate the game, which resulted in a 5-1 win.

On the final day of the group one phase, players now faced their most difficult opponent, F.C. Barcelona. Two short weeks ago, the F.C. Barcelona team won the National Spanish Soccer Championship for this age group and were last year’s Donosti Cup champions. In F.C. Barcelona’s first two games of this tournament, they scored 31 goals and were not scored upon. Understandably the Tulis boys were a little tense before the game but responded extremely well. They played a very organized, space-depriving first half, and were able to launch a number of quick, effective counter-attacks. Throughout most of the first half, F.C. Barcelona led 1-0, but just seconds before half time; Barcelona scored one more goal on a deflection. The Tulis boys pulled together a very strong second half as well, with the Barcelona team trying to probe our defense with their superb passing, but they had no success. Tulis players continued to counter attack successfully, and there were many closely fought midfield battles. Finally in the closing minutes, Barcelona scored two more goals. The Tulis boys left the field confident and proud knowing that for much of this game they had evenly battled one of the best teams in all of Europe for this age group.

The next opponent for the Tulis boys was the Valencia team from Spain who had easily come through their round robin games with a score of 9-1. The Tulis boys started out this knock out phase of the tournament very well and scored an early goal. The game went back and forth with many chances on both sides. Valencia scored two more goals only to have the Tulis boys come back to tie up the game 2-2. The game was decided in penalties, and the Canadians came short by one goal and lost 2-3 in a heart breaking shootout.

FC Barcelona, who in their U-12 division has a player already being paid $45,000 per year plus other expenses to play with the team, went on to win the tournament beating Peru’s premier club Cantalao 12–0 in the semi finals, and Aviron from France 9-0 in the final game. Last week Cantalao’s U-12’s won the Alpen Cup Tournament in Austria and just today they won the Gothia Cup Tournament in Denmark. FC Barcelona finished the Donosti Cup Tournament with an overall score of 85-1 from their 8 games. The Tulis boys are very proud to have held them to a score of 4-0 and consider that feat a great victory!

The Just as World Cup fever 2002 is beginning to die down another world-class soccer tournament is set to begin.

On Monday, July 1st, 2002 Canada’s Roman Tulis European Soccer School of Excellence’s U-12 boys will be among the world famous 44 soccer clubs who will take to the field proudly carrying their countries flags in the Donosti Cup Soccer Tournament in San Sebastian, Spain’s exciting opening ceremonies.

It is a soccer players dream come true competing in the 11th anniversary of this very prestigious tournament. This year’s tournament boasts of the highest number of clubs that has ever taken part in this tournament. The Tulis boys, who will be playing seven-aside soccer, will be treated to some very tough competition and fast paced European style games against top world class youth teams from France, Italy, England, Sweden, Portugal, Spain, Argentina, Brazil, and Peru, just to name a few. The team likely to be their toughest opponent and the one they are most looking forward to playing, will be the world famous FC Barcelona.

Last year Tulis’ ’89 boys placed 3rd out of 40 teams in their age group at the tournament. European and South American coaches, as well as tournament organizers were surprised and ecstatic over the level of commitment, skill, and work ethic that the Tulis boys showed in their determination to reach the finals. The boys not only came away with the third place overall win, but were also presented with the trophy for the best team out of North and South America, and the pride in knowing that they were the only team in their age group to score on FC Barcelona.