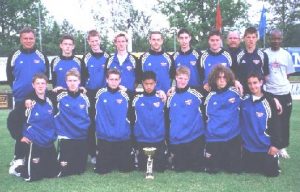 May 2002 – the RTESSE U-17 boys came away with a 3rd place finish
at the Invitational Soccer Tournament in Waalwijk, Holland

Since the conception of the Roman Tulis European Soccer School of Excellence in 1993, it has been the oldest players who have served as pioneers – paving the way for future generations of Tulis players. As each group would return from yet another successful European tournament word would spread throughout Europe’s soccer community about a Canadian soccer school that could compete with or (heaven forbid) beat them at their own game. As the school’s reputation grew, doors began opening and clubs who had previously balked at playing a Canadian team – Leeds United, Bayern Munich, FC Barcelona, 1860 Munich, NAC Breda, Ajax Amsterdam – to name just a few – now became interested in meeting this Canadian anomaly. In the past few years, Tulis players have slowly been migrating south of the boarder to play (on full or partial scholarships) for US Universities or Colleges. These players have represented the Tulis School very well indeed and once again word is spreading – rapidly! In the fall of 2002, the school was overwhelmed by the tremendous interest from US institutions. Inquires came from all over the States. Among them were NCAA Division One school’s such as Harvard University, Columbia University, Boston College, University of Vermont, Oregon State, University of North Carolina, University of Kentucky, Adelphy University, and Towson University to name just a small few. Many of these coaches made special trips to the Tulis school to watch the players in action. The coaches were very impressed with what they saw, some of them returning two and three times. 2003 promises to bring yet another migration south. The road has been paved, and the school’s younger players now know the doors are wide open; with hard work, dedication, and commitment, they could be the next players to step through. 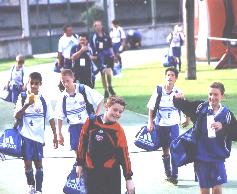 A Brief History of the “Roman Empire”

In striking royal blue, Roman’s legions redraw the football map from Canada to Europe
**This article has been reprinted with permission from World Football Pages; Issue 1 (May 3-16, 2002)

Hanging on the wall of my cramped little office is a bold, colorful pennant, given me recently by an equally bold, colorful man. Upon first meeting Roman Tulis, his East European origins were clearly evident in his characteristics, his manner and his graciousness. Those same origins may help explain his enthusiasm for football and the dedication to his craft, namely that of grooming young local players to compete with the very best in the world.

Adorning the walls of Tulis’s Coquitlam head office is the memorabilia that suggests, without doubt, that the school he founded in 1993 is competing with great success on the world stage.

The pennants hanging in abundance around the office reflect a virtual who’s who of international soccer – Bayern Munich, FC Barcelona, PSV Eidenhoven, Leeds United, to name a few. All have premier youth teams that Roman’s legions have battled, and often conquered.
You can’t buy these pennants like cheap imitation jerseys.

They come only through a handshake between the captains of opposing teams, on the battlefield moments before kick-off.

They are an age-old and colorful tradition. Tulis has them to spare, though I doubt you could ever offer him enough to take even one off the wall. Likewise, I’m sure, with the impressive collection of international jerseys worn by players who have worked hard under Tulis’s guidance to match skills and wits within the ranks of the world’s best youth teams. And his youth teams, both boys and girls, young men and women, are no strangers to big games and the silverware that comes with them.

My own awe-struck image reflected back at me from a glistening wall of silver and glass trophies that pay testament to the efforts and aspirations of Roman Tulis and the players that meet and exceed his demanding requirements.

Years ago naysayers were quick to suggest that the market for a school such as this wasn’t here in the Lower Mainland. Regardless, Tulis was confident that the school sporting his name would succeed where others had failed, by providing a level and intensity of training that predecessors had failed to.

Roman’s time and energies are not hindered by a 9 till 5 job elsewhere. Soccer is his trade, and one he’s been perfecting since 1978, including 10 years as youth coach for Slovan Bratislava, and head coach for the Slovakian National Youth team.

His focus is 100% on the kids and, far from being the administrative type, Tulis hits the field every day with his sprightly, youthful charges, coaching six teams himself and assisting with others.

The continued success of The Roman Tulis European Soccer School of Excellence is a testament to what can be achieved here in British Columbia with the right ethic and attitude from both the coaching staff and the students. In fact Tulis insists that to develop a great player one must also develop an outstanding person, one of character and integrity on and off the field.

Tulis is leading his legions by example and the results have global consequence. Today the training grounds of B.C., tomorrow the battlefields of Europe and beyond.

BC Lads – The Toast Of Spain! 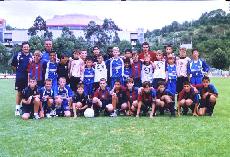 The U-17 boys came in strong competing against the Swedish premier league club – IFC Norrkopping, over the Victoria Day long weekend, winning the game 2:0 and coming away with a 3rd place finish at the Invitational Soccer Tournament in Waalwijk, Holland. The boys met Spartak Trnava, a premier league team of Slovakia, in the semifinals.

The game went undecided in regulation time and the opponent’s goalie managed to scramble out one of the five penalty shots and turn the win into Spartak’s favor – 4:5. Spartak Trnava later defeated Karnten FC, Austria 1:0 and won the tournament. Home, Dutch teams positioned themselves on 5th and 7th place.


After the last game, the German team came forward with a big compliment on the skills of the Canadian boys and asked for a group picture!!

During the second tournament in Eidenhoven, Holland the boys experienced that being a guest on European soccer fields is not exactly the same as being a guest at European hotels! The very first game against the home team U.N.A. indicated that this tournament would not be a walk in the park.

Their opponent showed no mercy at personal contacts and unfortunately neither did the referees who gave the home team quite obvious propensity. But our Tulis boys showed no fright, stayed focused on the game, and earned a scoreless (0:0) tie.
In the same fierce atmosphere, the young Canadians fought against Belgium premier league team RKC Genk, and at the end of regulation time lead 2-1.

The referee, however let the game continue another 8 minutes in which the Belgium’s were able to score an equalizer and turn the outcome to 2-2. 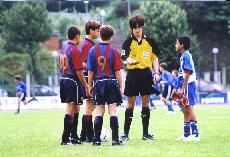 The character of the third game did not change much, but even though the referee again let the game go another 8 minutes longer, the home team, DeGraffchap could not penetrate Tullis’s players defense and had to settle for an undecided result of 0-0.

All in all, the boys competed extremely well and, once again, proved that we can compete with Europe’s top level competition.

Donosti Cup Success Brings Praise to RTESSE U12 Squad
**This article has been reprinted with permission from World Football Pages; Issue 13 (Nov 15-29/02) 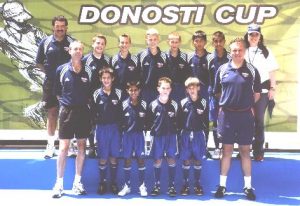 Arguably the Spanish play the best football on the planet. Real Madrid, Valencia, Deportivo and FC Barcelona are household names for anyone who takes the game seriously. The Spanish are, in a word, wizards, with style and tactical prowess that leaves most opponents wondering why they even showed up.

Unless, that is, you follow the exploits of Roman Tulis’s European Soccer School of Excellence. Tulis teams are no strangers to the challenges of European football, having competed at many youth-level tournaments over the years. The are also no strangers to the Spaniards, in particular FC Barcelona, whom they’ve met twice in as many years at the highly respected Donosti Cup, a youth club showdown of 166 teams at the 2002 event in San Sebastian, Spain.

Last year the RTESSE U12 squad were the only team to score against Barcelona in a 5-1 loss during group play. Outstanding, considering the Spaniards usually run up double-digit score lines. When Donosti committee member Zaloe Gil De San Vicente questioned Barcelona’s coach Sergio Lobera Rodriguez about the Canadians, his response was encouraging: “We didn’t know anything about Canadian soccer before playing RTESSE. We know you (Canada) are famous for hockey, but thanks to Roman Tulis now we know you can play soccer as well. Tulis is a great ambassador of Canadian soccer.”

Truth is, in 2001 the Spanish master was a “little concerned” about RT’s physical style and Tulis will attest that Spain wasn’t fond of his lads. However, a year passed, a new tourney dawned and the BC hopefuls once again drew the Spanish giants in group play. After 90 minutes RT was beaten again, but only 4-0, against a club that was packing a $60,000 per year salaried 12 year old (Lago Falque Silva) and was destroying Europe’s best by an average of 12 goals a game. Granted, in seven-a-side football scores run higher, but not that high! Swedish champs Ad Cantoloa were pummelled 12-0 in the semi-final by a distinctly superior Spanish side. “The game against RT was the best game that we played,” confirmed Rodriguez. “They are a very disciplined team, technically they are very good – very skilful. You can see his (Roman Tulis’s) European touch on them.” Rodriguez further suggested that they “should meet again in the final.” Not possible this time due to group organization, but next year the Spaniards may get their wish if Tulis can take his U12 charges back to the 2003 Donosti Cup. The invitation is there.

Tulis and his boys made some new friends and earned a lot of respect, both for the club and country. Who knows? Next year Tulis and his legions may just rain on the Spanish parade.

Since the school opened, Roman Tulis has groomed close to 200 young soccer players to eminent soccer clubs, teams, provincial and national squads. Out of the initial 12 boys enrolled in 1993, three are now playing for professional European teams. 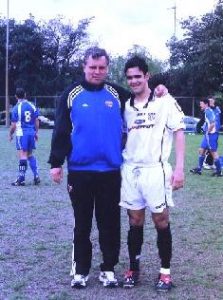 HISTORICAL MOMENT!
Former student Santiago Fernandez (pictured here with Roman) who plays for NAC Breda, was the first Tulis pupil to play for the opposing team against the Tulis school in a European competition 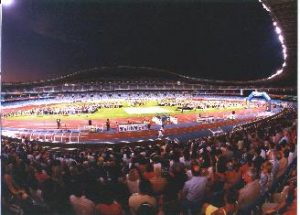