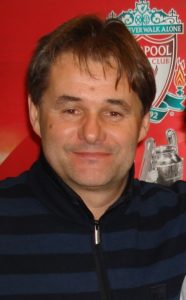 This past November the school welcomed a very special guest coach. Dr. Ivan Galad from Slovakia, who was a close friend to Roman Tulis Sr. and remains a family friend to the Tulis family came to work with our full time players and coaches.

Dr. Galad has had an incredible career that spans 33 years as a professional player and coach, including stints in charge of Slovak Super Liga sides FC Nitra, FC Senec, and MFK Ruzomberok. From 2011-2014, he was also in charge of the U-21 Slovakian National Team, overseeing the development of countless world-class players. He is also among the most educated coaches in the game, earning a PhD in Physical Education and Sports from Comenius University, his UEFA A and UEFA Pro coaching licenses, as well as full-time residencies to expand his football education at PSV Eindhoven, OFC Nice, and Liverpool FC.

Dr. Galad has spent time at our school before, working alongside Roman Sr. for a week or two at a time during 1995-1997 as well as several week-long visits throughout the 2000’s. It was Roman’s belief that working with professional European coaches of Dr. Galad’s calibre will both broaden our players’ footballing outlook and inspire them to take their game to the next level. It also provides our players and coaches an opportunity to experience first-hand the latest European training methods, concepts, and ideologies.